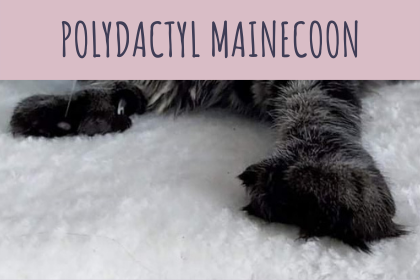 The polydactyl name is from a Greek word meaning multi-toed. The large paws are usually double wide in
size they can walk through snow more easily, hence the nickname snowshoe cat, but often called Poly’s.

A Poly mainecoon is a mainecoon in every characteristic, big bold and beautiful. An average cat will have
five toes on the front and four on the back. A Poly can have eight toes on each paw.

A natural anomaly, the polydactyl dominate gene in the mainecoon is a simple autosomal, meaning not
linked to a dominant gene. The Pd gene is a harmless genetic trait that is not to be associated with other
anomalies. Because of this, you must have a poly parent to have a poly kitten.

There is no documented ill effect of the polydactyl gene in the mainecoon cat. Scientific research data
has suggested that the poly mainecoon is a more preferred trait in the working breed for health and
vigour. Many non-polydactyl mainecoon have a poly member of their genetic lines in their pedigree, you
can see this when looking at their pedigree you will have the letter P somewhere in the name of the cat.

Breeding these beautiful majestic cats is still fully accepted and recognised as a pure breed worldwide.
They can be registered with any official cat association.

Please have a look at my stunning Poly girl Kleopatra. She has six toes on all for paws.